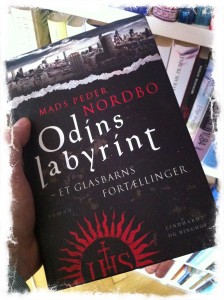 When I awoke again it was far into the night. Something had disturbed my sleep. I lay completely still and tried to focus on the noises coming from the city outside my window. But the noise I had heard had been closer. Like the sounds I heard in the walls. Just closer still. The sound came again. Creeping. Whispering. And I realised that something was moving around at the foot of my bed. I lay with my head hidden under the duvet, but my feet were sticking out the other end. The end where the sounds were coming from. Fear crept into every part of me, making every hair on my body stand on end.Silently I listened to the darkness through the duvet. It still sounded mostly like a low whisper, but so much like words that it had to be human.

Carefully I tried to pull my feet back under the duvet. But at that moment silence fell. Deafening, frightening silence, but the source of the noise was still there. I could feel it. I wished myself a million miles away and almost vomited. A strangling sensation threatened to tighten my throat so that I could neither swallow nor scream. The only right thing to do was to throw off the duvet and see who was there, but I did not dare. Did not dare sit up in the dark without knowing who was hiding in it.

I wanted to scream. Scream and jump out of bed. Flee from the room. I saw Graham Whitmore before me as he fell from the balcony. I thought about Rottbøll. Rottbøll and his cane. If I had had that cane with me in bed, I could have jumped up and swung it wildly around the room. Swung until it sank deeply into its victim. But all I had was a pillow.

The room was still quiet. Very quiet. The next few minutes I lay as though in a cocoon, almost without breathing. All my senses were alert. Then finally I sat up. Blind in the darkness. But it was only a moment before I saw the dark figure standing between my bed and the door. A strangled scream escaped me as I jumped out the opposite side of the bed. It shouted some words that sounded like a mixture of Latin and Old Norse, then it vanished out the door and down the stairs. Gone.

Nothing more happened. Only the scent remained hanging in the air. The figure did not return. After staring panic-stricken into the dark for a while, I walked over and turned on the lights, my shoe in my hand, ready to strike. I had to cling to something. I took a few steps down the stairs and looked down over the banister to the third floor. The door to the room with the hatch was closed, but I had no doubt that the scent which had accompanied the figure in my room was the same one I had encountered in there.

‘What the hell just happened?’ I asked aloud to hear the sound of my voice. The artificial light had wrapped itself around me and worked like a tonic. My heart began to beat normally again.

I had no desire to stay in that house another minute. However, when everything was said and done, the figure had not harmed me. So instead of giving up I decided to stay.

I left the light on, wedged the chair from my desk under the door handle and hid under the duvet. It was only when the dawn of a new day swept away my membrane of artificial protection from the dark that I emerged again, relieved.